This is an old post and doesn't necessarily reflect my current thinking on a topic, and some links or images may not work. The text is preserved here for posterity.
Octopus Deploy is now a 1.0, available from OctopusDeploy.com.

A few weeks ago I posted some screenshots of an application I'm working on. A few people guessed, rightly, that it is a tool for automated deployment. Progress is going well, so I'd like to share some more details, and get your feedback. 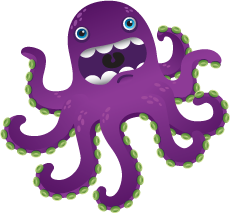 Octopus is a automated deployment solution for .NET applications, powered by NuGet and designed for convention over configuration.

I'm working my way through the SecretGeek 25 things list, and writing plenty of code. My goal is to have Octopus ready for beta testing in a few weeks. If you'd be interested in taking Octopus for a spin, add your email address below. I promise to only send occasional updates as the beta program opens.

Where Octopus fits in

Imagine your development team has been charged with building an intranet web solution. The solution consists of:

The team are working iteratively. They check code into source control, and the build server picks up the code, compiles it, and produces artefacts ready to be deployed. Now, someone has to figure out how to deploy it.

Every application has different deployment needs, but they are usually pretty similar:

Ideally, these deployment steps would be automated. Unfortunately automating these deployments still takes a lot of manual work. Usually the solution is a cobbled together band-aid solution of PowerShell scripts, XPath queries, batch files and point-and-click tools.

Once you've cobbled together the PowerShell scripts and MSI packages for your application, zoom out, and look at the rest of your organization. How many other projects do you have? How many of them have automated deployment? How different is the deployment process for each application? Does it need to be this hard?

Here's where Octopus fits in a typical organization: 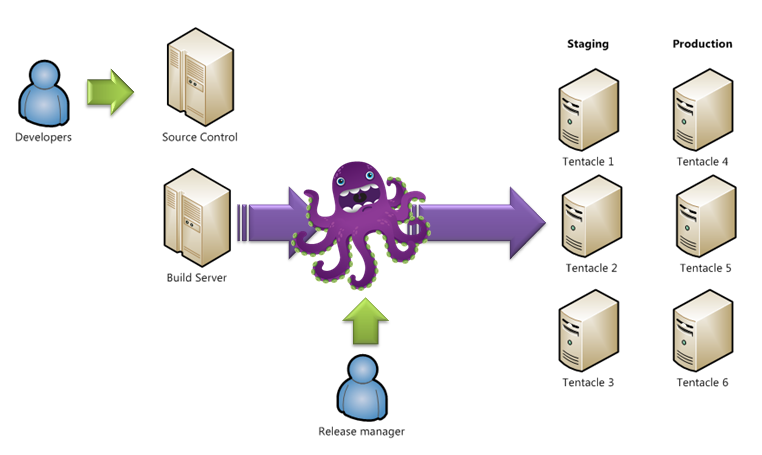 Most of these concepts should be pretty intuitive from the UI - my goal is to make the release process pleasurable. Check out some of the screenshots to see where it's going.

Octopus was inspired by AppHarbor, which performs automated deployment of .NET applications from Git/Mercurial check-ins. AppHarbor has a very clever system for dealing with deployment:

The end result is you never need to write automated deployment scripts for AppHarbor applications - it's automatic, because most applications work the same way.

Conventions in Octopus include:

The cool thing is that all of these steps are run locally on the target server; you don't need to mess around with configuring WinRM or PowerShell Remoting.

Instead of MSI's, Zip files or WebDeploy packages, Octopus standardizes on the NuGet package format. There are a few reasons for this:

At first this might seem like a strange use of NuGet. Currently, NuGet is mostly used for packaging DLL's and other files, mostly for open source components. Why use NuGet for packaging complete web applications or Windows Services?

If you spend time in the world of Linux however, you can see that package managers (like NuGet) have evolved beyond libraries. If you want to install Apache or MySQL on Linux, you'll use a package manager. Shouldn't we be able to do the same on Windows?

An aspect of this idea that I think is really interesting is the concept of an internal "enterprise software inventory". Imagine if every version of every internal application you built was available from a NuGet feed, instead of a mix of File Shares, TFS Drops and TeamCity artifacts?

Since Octopus takes a pretty holistic view of your projects, environments and releases, it can be used to answer some interesting questions:

I've spent a lot of time over the past few years working on open source projects. Open source projects are hard. Getting contributors is tricky, and even when you do, they usually focus on contributing "fun" features rather than bug fixing and documentation. Unless your project is large enough to have a lot of momentum, it's hard to attract committed contributors to do the not-so-fun things.

I think Octopus stands a much bigger chance of succeeding if it has people committed to doing the not-so-fun things, producing a very useful, very high-quality product that you can trust to reliably deploy your software. For this reason (plus, well, greed :-)) Octopus is going to be a commercial product, and my first MicroISV. Even if it's a colossal commercial failure, I'm looking forward to the experience of product development.

At this stage I expect Octopus will be priced using a TeamCity model - free enough that you can use it to deploy one project to your organization, but by the time you need to deploy your second project, you'll have gotten enough value from it that you won't mind sharing the love.

What do you think?

This is one of my longer blog posts, and I hope I've done a good job of explaining what Octopus is all about. I'd like feedback, good or bad, about the direction. Specifically:

Growing into an office