I'm a developer by trade, and I've never had any interest in marketing. In fact, at a startup meeting some months ago, I gave a presentation about the business aspects of Octopus and confessed that I simply have no idea about marketing, which was met with laughter.

My attitude was that we'd just build an awesome product, and everyone would use it. The experts (including the hosts of Startups for the rest of us) always emphasise that marketing is more important than the product. But I didn't know anything about marketing; I wasn't interested in marketing. And I was fine with that. I figured we'd just hire a "marketing guy/girl" someday.

This year as I thought about my goals for 2014, I realized something:

That was a really dumb attitude to have.

In 2011 I decided to transition to working on my own ideas, and Octopus Deploy was born. In 2012 it became my full time job, and in 2013 revenue had grown to a point where we were also able to bring Nick on full time. I'm really happy with how the last year has gone.

Revenue between 2012 and 2013 tripled, and I'd like to triple it again by the end of 2014. But I don't think that's possible if I continue my Sergeant Schultz approach to marketing.

Most of 2013 was spent on building Octopus 2.0, and I think the product that we have is awesome. My goal for 2014 is to focus on growing the business, by spending 60-80% of my time on growth-oriented tasks, rather than writing code (after all, Nick is way better at it than me).

I'm going to approach this goal in five phases.

I have a confession to make: I was spending about $2,500 a month on AdWords for most of the year, and I was too scared to tone it down in case sales dried up. Then a few weeks ago Josh Ames showed me how to see if those clicks were converting to anything in Google Analytics. How much revenue do you think AdWords contributed? A big fat zero.

AdWords might in fact be a good platform, but it turns out that if you don't take the time to measure and optimize the conversions from it, it can be a big black hole for money. So my first step has been to turn off all advertising until I figure it out properly. That was an expensive lesson.

Phase 2: Identify and measure the funnel

The sales funnel for Octopus Deploy looks something like this: 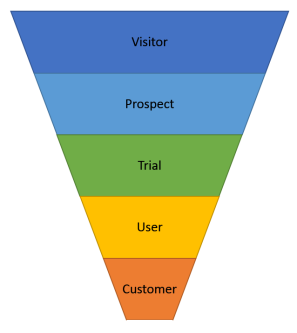 Visitors stumble onto our website. If we're lucky, we might convince them to join our mailing list or otherwise get in touch with us, so they become prospects. At some point, they might decide to install Octopus and give it a trial. If they are still using it after three days (and so are getting value from it) they become users. And at some point, they'll be using it enough to decide to buy a license.

The mistake I made in 2013 was to spend money to try and drive more traffic in to the top of the funnel, without even measuring or optimising their way into the subsequent stages of the funnel. So, with each of these stages, I'm going to start to measure not just the number of people in each part of the funnel, but the conversion rate between them.

Since the data for each of these stages comes from different sources (visitors from Google Analytics, trials/customers from our license database, etc.) I'll probably just use a spreadsheet to track it.

Octopus Deploy users can opt-in for anonymous usage tracking - I'm going to be using that information to track abandonment rates, especially in the critical first few days between convincing someone to install the product, and for them to still be using it a week later.

Once I can measure what the funnel actually looks like, I'm going to look at strategies for optimising it. For example, how can I convince visitors to the site to become prospects? This will probably involve a lot of A/B testing on the landing pages, and adding resources like whitepapers and offering email crash courses.

By optimizing the conversion rate between each stage of the funnel I'm hoping to achieve some growth without actually driving any more traffic. Hopefully this will also result in a better product (e.g., how can we reduce the abandonment rate in the first 7 days? Perhaps more tutorials?).

We have a mailing list with over 700 subscribers, but I only seem to email it once every 3 months when I remember to. Our Twitter account has a decent following but I rarely post to it. When people ask for a trial key, I don't email them to follow up 30 days later to see how it's going. When people use the free version of Octopus I don't even ask for an email address.

I'm going to focus on using these channels better:

Only once the funnel can be measured and has been optimized, will it make sense to try and drive more people into the top of the funnel. But I'm not just going to re-enable AdWords or try and get a mention on TechCrunch. The goal is to drive the right kind of traffic. That might mean experimenting with different ad networks that are more developer/DevOps oriented, as well as looking at other, non-paid forms of acquisition such as content marketing.

Importantly, I'm going to be measuring this rigorously and applying the same optimizations. There's no point driving traffic that isn't actually converting or isn't the right audience.

The most important thing I learned in 2013 is that "marketing" isn't just something you can spend money on and forget. Like anything worth having, it requires significant time investment and dedication. I'm going to dedicate this year to learning more about marketing and growing businesses, and putting that into practice, and less time writing code.

I believe that we've built an awesome product, and it could be helping a lot more people to improve their ability to deliver working software to production successfully. I'm going to dedicate 2014 to finding and helping those people.