App.net recently caused a stir by promising to create a social network that users pay to use. This is an interesting idea because it means that the network will make money directly from users, rather than through advertisers, so there is more incentive to make the network nice to use.

That said, I'm not sure how new this is. I've been "paying" to use social networks for some time. Not directly to the network, but indirectly through the costs of being on the network:

I put up with these costs because there's some value I expect to get out of the social network. Although I deleted my Facebook account a while ago, I re-created it recently just to connect to some relatives, because that's valuable to me. I get value from Google+ in the interesting links people share, and I get a lot of value from Twitter due to the discussions that take place.

LinkedIn, on the other hand, is a social network that I could never figure out. For years, I kept my profile up to date, accepted friend requests, and put up with recruiter emails. I even joined a bunch of discussion lists, only to find they were really just recruiter hang outs too. I would log in, and look through my stream, but the only interactions were "Joe is connected to Bob", or occasionally "Joe has a new job" (which, depending on who Joe was, I either already knew or didn't care).

So after years of "paying" to be a member of LinkedIn, I asked myself, what value am I getting from this network? I have 306 connections, but what does that mean? 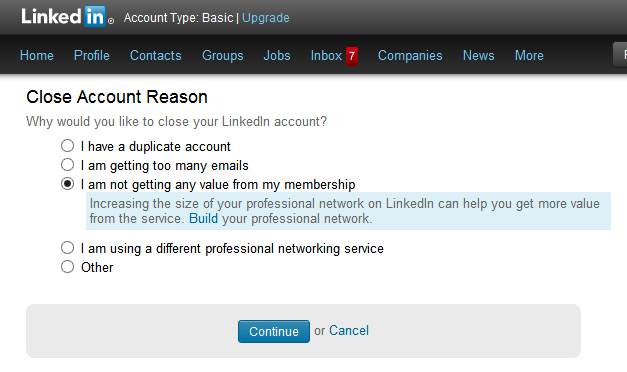 Real networking is about interacting with someone - discussing ideas, finding shared interests, learning about who they are and what they stand for. You can interact with many people in many places. Chat with them on Twitter or Jabbr. Join mailing lists that they frequent. Talk to them.

The kind of faux networking created by LinkedIn reminds me of when I was a six year old at school, and kids would ask each other "will you be my friend?". As adults, friendships come about implicitly because of interactions and communication, not from asking to be someone's friend and then accepting said friendship request.

After all, the primary piece of information on LinkedIn is your employment history. And who cares about employment history? Only employers and recruiters. Banks won't hire you unless you've worked in banking (because they only want people who will repeat the same mistakes over and over, not people who will make new mistakes), so they want to see that you worked at a bank in 2003. But the people you really want to network with - the programmer who could expose you to a cool concept in Erlang, or who could collaborate with you on your open source project - they aren't interested.

LinkedIn is a network built around "Joe now works for Acme". But I realized that where Joe works doesn't actually matter. I follow tons of interesting people on Twitter without knowing where they work, because it's their ideas that are interesting. I learn a lot from interacting with other people, not reading about what their job responsibilities were at some company I never heard of in 1998.

In fact, the more I think about it, the more I think LinkedIn is just a giant scam invented by recruiters to improve the chances of finding the right candidate. It's like every other job service/employment gateway except there's a social graph to improve results. 99% of people get no value from it, but don't want to leave for Fear of Missing Out. So like me, they log on once a month to accept 34 meaningless "connections" from people they either already know or have never heard of, and delete a handful of spam, just for the one in a million chance that this is the week that there'll be a job offer that involves a writing Ruby on a tropical island and a six figure signing bonus.

To cut the story short, I couldn't see how the benefits of being on LinkedIn outweighed the costs, so I deleted my account.

You might be one of the 5% that actually get value from LinkedIn. Maybe you do a lot of short term work, or you are looking for new opportunities (but between us, I think the people who you really want to work for are probably more interested in your blog and Twitter and GitHub than where you worked in 1998). I'm not, so I'm out.

The $50 fee to join app.net may be high, but it's not the only cost of joining a social network. The real question will be what kind of value will the $50 get me? What kinds of meaningful interactions will I get from the service?